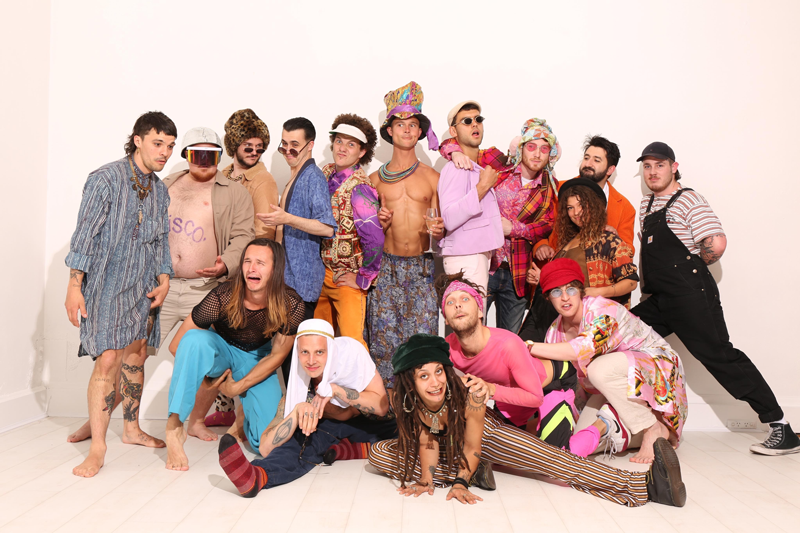 Exploding out of Sydney’s inner-west, The Regime is a 22-piece funk collective, that’s tipping the scales firmly back into the favour of fun. Dripping with raw sexual energy that’s one part James Brown and two parts Jamiroquai lavishly sprinkled with George Clinton & Parliament-Funkadelic, this instant party machine is an orgiastic carnival of the senses that has-to-be-seen-to-be-believed!

A lively, music experiment that generously borrows from funk, soul, electro and twists it into a sumptuous undulation, their debut EP If it is, it is! Isn’t it? has seduced audiences all over the country with its infectious grooves. From the anthemic charm of The Consent Song which invites you to “rise for the honourable Judge Jazz” to the impossibly smooth and eminently danceable hit Affection, The Regime is supremely adept at serving up a triple helping of thumping bass lines, hearty brass tones and fat lyrics to voracious crowds. “The Regime”, an expression once falsely disseminated and cunningly propagated, is now brilliantly redefined at the dawning of the decade 2021, finally giving sovereignty to the power of LOVE.

Following a jaw dropping support for Digable Planets, The Regime’s Newtown Festival 2019 takeover, cemented their status as Australia’s pre-eminent funk collective. As well as successful runs at Oxford Art Factory’s 12th Birthday extravaganza (plus post COVID lockdown’s 4 x sold out OAF shows late 2020), The Regime ruled at Subsonic (NSW) and Strawberry Fields (VIC) Festivals & after an extended enforced break is now slated for Bluesfest Byron Bay (NSW) for the 3rd time (!) plus many more TBA…. The Regime attack the stage with a hedonistic zeal that has firmly consolidated a reputation as one of the most exciting new Australian artists climbing their way to the top of the live music scene.